skip to main | skip to sidebar

Let's use a bit of logic:

Occam's razor says that the simplest answer is most likely to be correct and chaos theory says that through time the universe will simplify it's self. Therefore somewhere in either the 4th dimension or in meme-space every variation of the notion New Zealand must exist (also bare in mind that an infinite universe every given event is infinitely likely, the universe is by far the most logical (point 1a: a infintite universe is by far the most logical (simple) option. Point 2: how could you define the edge of the universe)).

If you don't buy memeplex theory, a meme is an element of social informatiojn (the social equivalent of a gene). When a large number of meme's combine to describe an object or an idea (eg. New Zealand) they combine to make a memeplex.

Given that theory, even if there is not a physical body of land called New Zealand that we think exists, there must be a "New Zealand" memeplex.
Posted by Daniel Raven-Ellison at 09:29 6 comments: 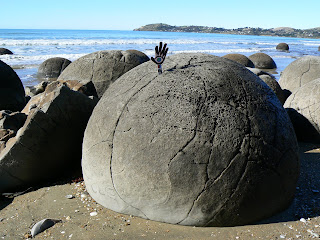 This Hand of Geography KNOWS that New Zealand exists as it travelled all the way to NZ in August 2007 with its owner. These are the Moeraki Boulders which are located 40 km south of Oamuru on the east coast of South Island. They are septarian concretions which may have taken up to 4 million years to form in seabed sediments. Since the sea bed has been uplifted, forming part of the New Zealand land mass, the boulders have gradually been eroded out of the neighbouring cliffs, landing up on the beach. To the Maoris the boulders are round food baskets and water gourds which were washed up on the beach after the wreck of the great canoe Arai Te Uru.
Surely, proof of New Zealand's existence, unless anyone knows of other locations in the world with concretions up to 2.2m in diameter?

I found New Zealand on Google Maps so it must exist.

My Mum moved to New Zealand from Scotland and lived there for over 20 years before coming to England. While in New Zealand my Mum's best freind was born in N.Z. and her son has been there and told me all about it. My mother has New Zealand citizenship and her freind and her son both have New Zealand nationality. This is legitimate proof that N.Z. is real.

I think that my teacher does not believe in New Zealand because the All Blacks play rugby so well that they mostly win! My freind Alex supports the All Blacks and has a top representing their uniform.

Satellite pictures have been taken of the Earth and show its countries. I've even seen New Zealand is in the atlas and my mother has been to many places such as Auckland. Also, New Zealand has a national flag which looks like this. English people settled in New Zealand a few hundred years ago. Before that the Maoris people ruled New Zealand and they called it Aotearoa. This means the land of the long white cloud. I have got a Maori tribes doll. On Friday my aunt and cousin are arriving from New Zealand and they will bring their own photographs of the country.

I expect there are many more reasons why New Zealand exists however these are all the ones I can think of for now.

Do you know, without any doubt, that New Zealand exists?